3 chosen in Phase I of USHL Draft 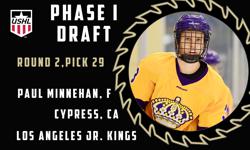 Three members of this past season's Los Angeles Jr. Kings’ 16U AAA state champion team - forwards Danny Minnehan, Parker Murray and Ean Somoza - were selected in Phase I of this year’s United States Hockey League (USHL) Draft, which was conducted on Monday (May 6).

The Muskegon Lumberjacks chose Minnehan, who tallied 13 goals for 37 points in 30 Tier 1 Elite Hockey League games in 2018-19, in the second round (29th overall).

Murray, who struck for 14 goals (17 points) in 23 Tier 1 Elite League contests, was chosen by the Chicago Steel in the seventh round (102nd overall).

The Sioux Falls Stampede landed Somoza, who rang up 10 goals for 31 points in 30 Tier 1 Elite game, in the eighth round (118th overall).

Defenseman Shai Buium, a former Jr. King, was selected in the sixth round by the Sioux City Musketeers (82nd overall).

Minnehan, Parker and Somoza were also members of the Jr. Kings’ 14U AAA team that advanced to the USA Hockey National Championships in 2017-18.

Phase I of this year’s draft was reserved for 2003 birth-year players. Phase II of the USHL Draft, which is open to all junior-age-eligible players, will be conducted tomorrow (May 7).