Four players who skated in Los Angeles Jr. Kings program this past season - Jacob Brockman, Jordy Brisson, Andre Gasseau and David Tolan - and five alumni were selected in Phase II of this year’s USHL Draft, which was conducted today. 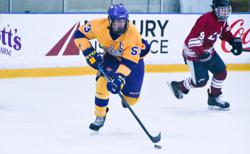 A handful of former Jr. Kings were also selected, including goaltender Mattias Sholl, who was the first Californian picked in the draft going in the sixth round (89th overall) to the Madison Capitols.

Phase II of the USHL Draft was open to all junior-age-eligible players.

In Phase I of the draft, which was conducted yesterday and reserved for 2003 birth-year players, three members of the Jr. Kings’ 2018-19 state champion 16U AAA team were selected: forwards Danny Minnehan, Parker Murray and Ean Somoza. Defenseman Shai Buium, a former Jr. King, was also chosen.