The Los Angeles Jr. Kings have announced the field and schedule for their 64-team Carmen Starr Memorial Day Classic, which will run from May 24-27 at four Southern California rinks. Teams from four states and British Columbia, as well as the Czech Republic and Russia, will compete. 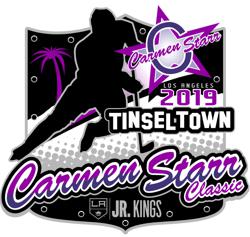 The Los Angeles Jr. Kings have announced the field and schedule for their upcoming Carmen Starr Memorial Day Classic tournament, which will run from May 24-27 at four Southern California rinks.

Kings Cove and Grimaldi's Pizzeria will serve as restaurant partners for the event, and PSE Event Housing successfully coordinated all hotel accommodations for out-of-town teams visiting over the weekend.

The Los Angeles Kings’ brand-new Off-Ice Training Center located inside Toyota Sports Center will also be available to all participating teams. Teams interested in scheduling a session should contact the facility’s director, Mark Hardy, at mark.hardy@toyotasportscenter.com and/or (424) 251-5995.

Outside of the 8U A division, all games played at Toyota Sports Center will be streamed live via the Internet through LiveBarn.com.

The Carmen Starr Classic is part of the Jr. Kings’ Tinseltown Tournament Series. Pre-registration will open for the Series’ 2019-20 season tournaments in early June.