The efforts of the eighth annual fundraiser, which was held last month at Mountain Gate Country Club, raised over $15,000 for the Jr. Kings' Financial Assistance Program and also introduced the Don't Walk Alone: The Walker Tobin Memorial Foundation. 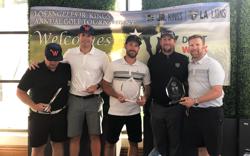 The Los Angeles Jr. Kings/LA Lions hosted their eighth annual golf tournament and social at Mountain Gate Country Club last month and the event proved to be successful on a number of levels.

The efforts of the fundraiser, which was orchestrated by Jeff Brockman, the PGA professional at Mountain Gate, raised over $15,000 for the Jr. Kings/LA Lions' Financial Assistance Program.

The day's festivities also featured the launch of the Don't Walk Alone: The Walker Tobin Memorial Foundation. Named in memory of Walker Tobin, a South Bay resident and hockey enthusiast who took his own life a year ago, the non-profit 501(c)(3) initiative will provide free mental-health counseling for players within the Jr. Kings/LA Lions program, as well as designate funds to high-character student-athletes whose families are in need of financial assistance.

"We couldn't be happier with the response we received from both the participating golfers and our generous donors and sponsors," said Jr. Kings executive director Kelly Sorensen, who also praised the efforts of the tournament's volunteer staff, led by Helen Alex and Christine Souto. "To garner so much support from the local hockey community and beyond means so much to our club as it relates to keeping the game affordable for our membership, not to mention raising the awareness of mental illness.”

"It was a great day all around," said Brockman. "From the player turnout to the charitable donations, the response from both from the hockey community and beyond was inspiring.”

The tournament's signature donors included: Luc Robitaille and Kelly Cheeseman of the Los Angeles Kings; Brad Berman of American Skating Entertainment Centers; Dean Moss of Manhattan Beach's The Hangar Inn restaurant; and Don't Walk Alone - all Hall of Fame sponsors who collectively committed a generous $40,000-plus to the fundraiser.

Plenty of others offered their goods and services towards the cause, including Craig Carroll of Tiger Press printing who provided all of the tournament's signage and banners; David Ondaatje, owner of R.L. Winston & Bauer Reels who gifted a fly rod-and-reel package to the tournament raffle; and Nike Golf, which showcased its products for the day.

"To see so many current and former players come out and show their support was outstanding," Brockman added. "It really brings another level of excitement to the tournament when these guys participate.”

Beebe, who also serves as director of Don't Walk Alone, was equally pleased his newfound organization had the opportunity to participate in and benefit from the day's festivities.

"To have the Jr. Kings' support says a lot about the people involved in the club and their commitment getting behind our players' mental well-being," said Beebe, who also serves as head coach of the Jr. Kings' 13U AAA and 10U A2 teams. "We're excited to build on our partnership as we continue our collective fight against mental-health issues."

On the course, the foursome of Beebe, Bennett, Frost and Bodie won the tournament's team scramble, followed by the teams of Powel, Vachon, Markoff and Heyman (second place) and Skiko, Rohrmann, Schenz and Harrington (third).

A silent auction, which was conducted during the tournament and social and included plenty of sports and entertainment memorabilia, helped add to the charitable spirit of the event.

"This tournament is so much fun for the participants and every year we're committed to making it bigger and better," said Sorensen, who noted next year's event will be held on Monday, Aug. 24, at Mountain Gate. "We're lucky to have so many selfless people on our side who help make initiatives like this so successful and our club so special."