12U AA1 team claws way to tourney title in Boston

A resilient Los Angeles Jr. Kings’ 12U AA1 team celebrated the championship in its division at this year’s Elite Hockey Events-hosted Boston Cup, which was contested last weekend in The Bay State. 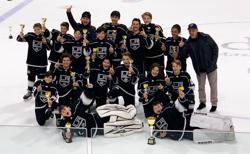 The Los Angeles Jr. Kings’ 12U AA1 team celebrated the championship in its division at this year’s Elite Hockey Events-hosted Boston Cup, which was contested last weekend in The Bay State.

After opening the tournament on Friday with a 4-0 loss to the Ottawa Sting, the Jr. Kings rebounded later in the day knocking off the New Hampshire Avalanche, 5-2.

On Saturday, the Jr. Kings conceded a 4-0 lead to the New Jersey Jr. Devils and settled for a 4-4 tie, forcing L.A. to win its next game to advance to the semifinals.

They did just that, routing the Ramapo (N.Y.) Saints, 8-1, before setting up a rematch against Ottawa in the semis on Sunday morning. In that contest, the Jr. Kings exacted revenge over the Sting with a 3-2 shootout triumph.

In the finale later in the day, the Jr. Kings fell behind 2-0 to the Chicago Bruins before evening the score. L.A. fell behind again, 3-2, but the resilient group kept its drive on its way to a 4-3 victory.

“We came all the way here (to Boston) for a reason, and now we’re going back home a better team,” said Jr. Kings head coach Jeff Bain, who’s assisted behind the bench by Andrew Jurkowski and Jack Strommen. “With so many ups and downs, I’m so proud of how our kids battled for our collective efforts as a group and for each other all weekend.”

“The best team always wins, and our kids proved that this weekend,” Bain added.