Former Los Angeles Jr. King and Calgary Flames prospect Dustin Wolf was named the WHL Goaltender of the Month for September and October after posting a 7-3 record in 10 appearances with the Everett Silvertips. 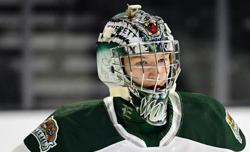 In his third season stopping pucks for the Everett Silvertips, Wolf compiled a 7-3-0-0 record, including two shutouts, 1.75 goals-against average and .945 save percentage in 10 appearances as his team reclaimed the familiar spot of first place in the U.S. Division and Western Conference with a 9-3-0-0 record to begin the 2019-20 WHL campaign.

Overall, Wolf, who was selected in the seventh round of the 2019 NHL Draft by Calgary (214th overall), ranked fourth in the league in wins - one behind a three-way tie for first place - and is tied for first in shutouts. Wolf also ranks third in goals-against average and second in save percentage among goaltenders to appear in at least five games this season.

In 91 career WHL regular-season games, the 18-year-old Wolf has compiled a 61-24-2-2 record, including 13 shutouts, 1.82 goals-against average and .935 save percentage. Wolf presently ranks third all-time in shutouts by a Silvertips goaltender behind only Carter Hart (26) and Leland Irving (21).

Last season, Wolf, who was originally chosen by the Silvertips in the fifth round of the 2016 WHL Bantam Draft (104th overall), was named the recipient of Daryl K. (Doc) Seaman Trophy as the WHL Scholastic Player of the Year.