Former Los Angeles Jr. Kings Vincent de Mey and André Ghantous, both members of Northern Michigan University, were named the WCHA Forward of the Week and Rookie of the Week, respectively, for the week ending Nov. 10 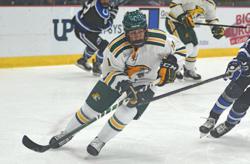 de Mey, a sophomore, continued his hot start with a career-best three-point night on Friday in the Wildcats’ come-from-behind overtime tie with St. Cloud State University. He then added an assist on Saturday night to bring the team within one halfway through the third period.

His four-point weekend (a goal for four points) was a personal best and led all WCHA skaters. He also posted the most helpers on the weekend in the league (three), points per game (two) and power-play points (three). de Mey’s power-play goal on Friday night sparked the three-goal comeback by the Wildcats and he earned credit for assists on the other two power-play goals to tie the game.

With his goal on the five-on-three man-advantage on Friday, de Mey’s five power-play tallies ranks second in the country while his eight total goals rank 10th in the nation in goals per game (0.80).

He now holds a three-game point streak and has highlighted the box score in nine of the Wildcats’ first 10 games. This is the third WCHA Player of the Week honor of de Mey’s career, all of which have come in this season’s first six weeks. He was also named the WCHA Forward of the Month for October.

Ghantous, meanwhile, led the Wildcats back from a 3-0 third-period deficit with a pair of power-play goals as the Wildcats rallied to earn a 3-3 tie with visiting St. Cloud State. The freshman forward added his third marker of the weekend in Saturday’s contest against the Huskies to share the WCHA lead in weekend goals and tie for third, nationally.

On his way to capturing his first career WCHA weekly award, Ghantous is now riding a six-game point streak (six goals for seven points) and has tallied five goals in his last four outings.