12U AAA team impresses over Thanksgiving

Over Thanksgiving Weekend, the Los Angeles Jr. Kings’ 12U AAA 2007 squad welcomed six highly-regarded programs - including three from Canada and one each from Alaska and Colorado - to town and ultimately won the championship in its division. 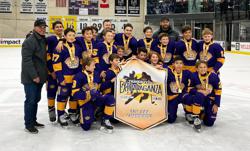 Outside of the odd national tournament, it isn’t easy attracting a group of elite-level hockey teams from across North America to play in Southern California.

But, over Thanksgiving Weekend, the Los Angeles Jr. Kings’ 12U AAA 2007 squad did just that, welcoming six highly-regarded programs - including three from Canada and one each from Alaska and Colorado - to town to skate in a seven-team showcase at El Segundo’s Toyota Sports Performance Center.

And the level of competition didn’t disappoint. Of the 22 total games played (each team played each other once in round robin culminating in a championship game pitting the top two teams against each other), 12 were one-goal contests with seven of those decided in overtime.

“That’s exactly what you want,” Jr. Kings head coach Jeff Turcotte said of the event, which was part of the Jr. Kings’ 68-team, 11-division Tinseltown Thanksgiving Extravaganza tournament. “Every team was competitive and every game was a test, and ultimately that’s what makes your team - and every team - better moving forward.”

The eventual-champion Jr. Kings - then ranked No. 5 in the nation - opened tournament on Thanksgiving Day with a 4-0 victory over the Anaheim Jr. Ducks followed by a 6-4 triumph over the Alaska All Stars. The next day, L.A. downed the Colorado Thunderbirds, 3-2, in overtime before besting British Columbia-based North Shore Winter Club, 8-1.

On Saturday, the Jr. Kings edged the London Jr. Knights, 5-4, in overtime before winning another OT game later in the day - this time against British Columbia’s Burnaby Winter Club, 4-3.

That brought L.A. and Burnaby - one of the top-ranked 07 teams in all of Canada - back the next day to play in the finale which the Jr. Kings won, 4-0.

“I liked how we competed,” Turcotte said of his team, which played the following weekend at a showcase in suburban Dallas (the Jr. Kings won the event with a 4-1 record). “All three lines were working hard and showing more consistency, I think the kids are starting to realize that success follows them when they’re consistently working hard, especially away from the puck.”

Off the ice, the visiting teams were afforded the opportunity to watch the Los Angeles Kings play the New York Islanders at STAPLES Center the Wednesday prior to the start of the tournament.

London, thanks to the generosity of Kings defenseman Drew Doughty, a London native who played his minor hockey with the Jr. Knights, was treated to a suite at STAPLES to take in the game, along with a meet-and-greet with the former Norris Trophy winner.

“It was an amazing experience for our kids,” said London team manager Alynn Clark. “To be able to come out to Southern California and play some great hockey on top of everything else we did way from the rink was special and for sure a trip to remember for all our families.”

“Very impressive,” added North Shore head coach and director of hockey Aaron Wilbur. “From the competition to the facility to being so close to the beaches and everything else, it was a first-class tournament experience all the way around.”

The task of assembling the division began a year ago with formal invitations sent to select teams from across North America, along with the legwork of Jr. Kings executive director Kelly Sorensen, who also serves as an assistant coach on the 07 squad, and the team’s manager, Shelby Russell.

“Coming from Southern California, we know full well the sacrifice, both financially and the time away from school and work, that comes with traveling to tournaments across North America, and with that finding the best competition, so we’re grateful to have been able to host an event of this caliber,” said Sorensen. “The feedback from all our guests was nothing but positive, and that’s what’s most rewarding.”

“They’re a good group of kids and good group of families,” said Turcotte. “They’re eager to learn and put in the extra time to get better, and that says a lot about them as young hockey players.”

And with an already-successful travel schedule under their belt, the signature event on the Jr. Kings’ 2019-20 calendar comes in February when they head to Eastern Canada to compete in the famed Quebec International Pee Wee Tournament.

“Quebec is an amazing tournament and an amazing experience, no question, but our focus is on continued development and improvement regardless who we play or where we play,” said Turcotte, who’s also assisted behind the bench by Brad Stuart. “And, after these last couple events, our group just keeps heading in the right direction.”