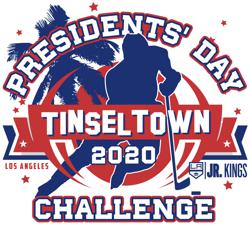 “We can’t thank all of the participating clubs enough for helping deliver what proved to be a great weekend of hockey,” said tournament director Brian McDonough. “There was so much spirited competition in every division, and the camaraderie and sportsmanship displayed by all of the players, coaches, team managers and families was second to none.

“We're also lucky enough to get such great support from both our terrific team of volunteers and the staffs at TSPC, Lakewood ICE and East West Ice Palace who help events like this hit on all cylinders.”

All 14U AA through 10U A games played at TSPC were streamed live via the Internet through LiveBarn.com.

The Presidents’ Day Challenge is part of the Jr. Kings’ Tinseltown Tournament Series. Registration is now open for the Series’ final event of the 2019-20 season: the Carmen Starr Memorial Day Classic (May 22-25). For more information and to register, visit JrKingsHockey.com.