Former Los Angeles Jr. King Dustin Wolf was named the Western Hockey League’s (WHL) Goaltender of the Month for February after posting a 9-1-0-0 record with the Everett Silvertips. 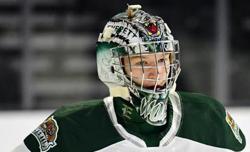 Earning the award for the second time this season, the Everett Silvertips netminder and Calgary Flames prospect posted a 9-1-0-0 record (two shutouts) over the month to compliment a 1.41 goals-against average and .939 save percentage.

This season, Wolf, a member of the 2019 U.S. World Junior Team who currently leads the WHL in all four major statistical goaltending categories, has compiled a 33-9-2-0 record (nine shutouts) to compliment a 1.83 goals-against average and .938 save percentage through 44 games.

Originally selected by the Silvertips in the fifth round of the 2016 WHL Bantam Draft, Wolf has posted an 87-30-4-2 record (20 shutouts) to go along with a 1.83 goals-against average and .935 save percentage in 125 games for his WHL career.

Wolf, whom the Flames chose in the seventh round of the 2019 NHL Draft, is currently tied for fifth all-time in WHL history for career shutouts by a goaltender. Former teammate Carter Hart, currently manning the crease for the Philadelphia Flyers, shares the WHL’s all-time record with former Vancouver Giants goaltender Tyson Sexsmith at 26.

At the 2019 WHL Awards, Wolf was named the recipient of the Daryl K. (Doc) Seaman Trophy as the WHL Scholastic Player of the Year.