Former Los Angeles Jr. King Mattias Sholl was named to the All-NAHL Second Team for the 2019-20 season. Yesterday, he was recognized as the league's Midwest Division Most Valuable Player among other honors. 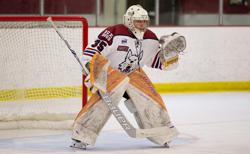 Yesterday, the Fairbanks Ice Dogs goaltender was recognized as the NAHL’s Midwest Division Most Valuable Player. He was also named to the All-Midwest Division Team and the division's Goaltender of the Year.

In 41 appearances this season, the 2000-born Sholl celebrated a NAHL-leading 29 wins (29-8-0-1-2 record overall), including three shutouts, to compliment a 1.99 goals-against average (ranking seventh in the league) and .924 save percentage (eighth).

Sholl, a member of the Jr. Kings’ Jack Bowkus-coached 16U AAA Pacific District championship team in 2016-17, also participated in this year’s highly-scouted NAHL Top Prospects Tournament, which was showcased in February in Massachusetts.

“Playing for the Jr. Kings is a huge reason for any success I’ve had,” said Sholl. “The coaches and goalie coaches I had at every level from Mite to Midget were monumental in my development and helping shape my game to where it is now.”

Sholl also credits his seasoning in the Tier 1 Elite League for much of his success.

Another former Jr. King, 2000-born defenseman Aidan Metcalfe, was named to the NAHL’s South Division All-Rookie Team this week after tallying a goal and 22 assists in 43 games for the Shreveport Mudbugs. He was also a plus-17.

The NAHL divisional teams and honors represent the four divisions in the NAHL - Central, East, Midwest and South - as voted upon and selected by the league’s 26 head coaches.