Lenny Greenberg, who skated on the Los Angeles Jr. Kings’ state and Pacific District champion 14U AAA team this past season, was selected by the Kamloops Blazers in this year’s WHL Bantam Draft. 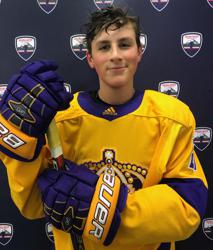 Lenny Greenberg, who skated on the Los Angeles Jr. Kings’ 14U AAA this past season, was selected by the Kamloops Blazers in this year’s Western Hockey League (WHL) Bantam Draft, which was conducted today.

A defenseman, Greenberg was taken in the sixth round (128th overall) of the proceedings, which was designated for 2005 birth-year players.

Greenberg tweeted: “I am thankful and honored to have been picked by the @blazerhockey. I am very excited for this great opportunity. I would like to thank my family, coaches, and teammates for helping along this journey.”

“Lenny is a really solid two-way defenseman," said Blazers director of player personnel Robbie Sandland. "He moves the puck really well to exit the zone, manages the puck well in all three zones and can shut down the opposition’s top players. He plays a responsible all-around game.”

The WHL is widely considered one of the premier junior leagues in North America. It has developed countless players for the professional ranks, including the NHL.

Goaltender Dustin Wolf, who was selected by the Calgary Flames in last year’s NHL Entry Draft, just wrapped up his third season with the WHL’s Everett Silvertips.