Former Los Angeles Jr. King and NHL draft prospect Brendan Brisson was named the United States Hockey League’s (USHL) Rookie of the Year for the 2019-20 season after connecting for 59 points (24 goals) with the Chicago Steel. 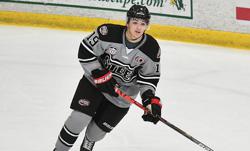 A University of Michigan recruit, Brisson, a forward who yesterday was named to the All-USHL First Team, finished second in the league in scoring with 59 points (24 goals) in 45 games this season with the Chicago Steel, which celebrated the Anderson Cup title as the circuit’s regular-season champions.

NHL Central Scouting recognized Brisson on its final rankings of 2020 draft-eligibles, which were released earlier this month. Brisson is listed No. 20 among North American skaters (a potential first-round selection).

“Brendan couldn't be more deserving of USHL Rookie of the Year honors,” said Steel general manager Ryan Hardy. “In his first year in the USHL, he developed tremendously to elevate himself from a player who was considered a potential late-round selection (in this year’s NHL Entry Draft) into a player who is now widely believed to be a first-round pick. We look forward to watching his continued growth in the years to come.”

The 2001-born Brisson, who was named the USHL Forward of the Week for the week ending Nov. 17 and Jan. 20, represented his country with the U.S. Junior Select Team that competed in December’s World Junior A Challenge in British Columbia.

Brisson is the second former Jr. King to win the award; forward Robby Jackson took home the honors in 2013-14, also a member of the Steel.

The individual USHL awards were determined by a vote of league's general managers.