Gasseau added to NTDP's Under-18 roster

Former Los Angeles Jr. King Andre Gasseau has been added to the U.S. National Team Development Program’s Under-18 Team for the 2020-21 season. 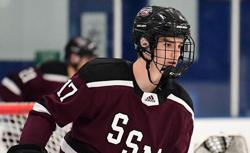 Former Los Angeles Jr. King Andre Gasseau has been added to the U.S. National Team Development Program’s (NTDP) Under-18 Team for the 2020-21 season.

This past season, Gasseau, a forward, struck for 33 goals for 62 points in 45 games with Shattuck-St. Mary's 16U AAA team. He also skated in three games with the NTDP.

Defensemen Aidan Hreschuk, a Boston College recruit, and Ty Murchison - both of whom played for the Jr. Kings’ 2018-19 state champion 16U AAA team along with Gasseau - skated for the NTDP’s Under-17 Team this past season.

The goal of the full-time development program is to prepare student-athletes under the age of 18 for participation on U.S. National Teams and success in their future hockey careers. Its efforts focus not only on high-caliber participation on the ice but creating well-rounded individuals off the ice.