Former Los Angeles Jr. King and Calgary Flames prospect Dustin Wolf has been named the recipient of the USA Hockey Dave Peterson Goaltender of the Year award, which is chosen each year from the pool of American-born goaltenders who played at the junior level. 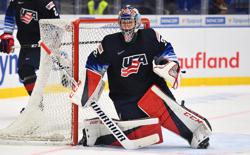 Former Los Angeles Jr. King Dustin Wolf has been named the recipient of the USA Hockey Dave Peterson Goaltender of the Year award.

The recipient is chosen from the pool of American-born goaltenders who play at the junior level each year. The award is named in honor of the late Dave Peterson, a passionate leader in goaltender development who twice coached the U.S. Olympic Men’s Ice Hockey Team.

This past season - his third with the Western Hockey League’s (WHL) Everett Silvertips - Wolf shined between the pipes. Through 46 games, he compiled a 34-10-2-0 record, including nine shutouts, to compliment a 1.88 goals-against average and .935 save percentage.

Among all WHL goaltenders in 2019-20, Wolf, who last month signed an entry-level contract with the Calgary Flames - the team selected him in the seventh round of last year's draft (214th overall) - led the way in goals-against average, save percentage and shutouts. He was tied for the league lead in victories.

The 6-foot, 165-pound Wolf, a member of this year's U.S. World Junior Team - he backstopped Team USA to a 6-3 win over Germany with a 17-save performance - stifled opposing offenses throughout the regular season. From Jan. 17-22, he compiled a shutout streak of 147:47, including a pair of shutouts against the Seattle Thunderbirds. In 21 of his 46 games, Wolf allowed one goal or fewer.

He also represented the U.S. on the international stage in 2018, finishing with a 2-1-0-0 record, including one shutout, at the Hlinka Gretzky Cup.