Former Los Angeles Jr. Kings Brendan Brisson and Dustin Wolf were two of the 43 players invited to this year’s World Junior Summer Showcase, which will be held from July 24-Aug. 1 in Plymouth, Mich. 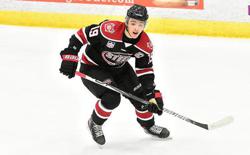 Former Los Angeles Jr. Kings Brendan Brisson and Dustin Wolf were two of the 43 players invited to this year’s World Junior Summer Showcase, which will be held from July 24-Aug. 1 in Plymouth, Mich.

The Showcase serves as an evaluation camp to assist in selecting the U.S. National Junior Team that will compete in the 2021 International Ice Hockey Federation World Junior Championship, which will run from Dec. 26, 2020-Jan. 5, 2021 in Edmonton and Red Deer, Alberta.

Listed No. 20 among North American skaters by NHL Central Scouting on its final rankings of 2020 draft-eligibles (a potential first-round selection), the 2001-born Brisson (pictured), a University of Michigan recruit, recently completed an outstanding season with the United States Hockey League’s (USHL) Chicago Steel in which he was named the USHL Rookie of the Year and to the All-USHL First Team.

Los Angeles Kings prospect Alex Turcotte, a 2001-born sophomore-to-be forward at the University of Wisconsin and the nephew of Jr. Kings coach Jeff Turcotte, was also invited to the showcase.

“We’re excited to have our players and staff together,” said John Vanbiesbrouck, general manager of the U.S. National Junior Team and assistant executive director of hockey operations at USA Hockey. “While Finland, Sweden and Canada won’t be joining us as we’ve been used to in past years, this will provide a great opportunity to have our players back on the ice and begin the process in earnest of building our team for the World Junior Championship.

“With the current pandemic, we’ll be doing some things differently, and that’s okay. It’s exciting to see rinks opening back up throughout the country and we’re most appreciative of the efforts of Dr. Mike Stuart from the Mayo Clinic, our chief medical and safety officer, among others, for guiding us in best practices to ensure the safest possible environment for our players and everyone involved.”

The United States enters the 2021 IIHF World Junior Championship seeking its fifth medal in six years after earning a record four-consecutive medals: gold in 2017, silver in 2019, and bronze in both 2018 and 2016.

“We’re thankful to everyone involved in all the planning that has happened to date and continues to take place,” said Gavin Regan, vice president of USA Hockey and chair of the organization’s International Council. “As hockey returns, we look forward to hosting our camp and we’ll certainly do it safely.”