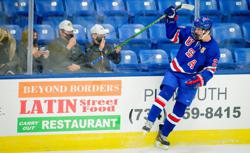 The 2003 birth year players were all tabbed as C-rated prospects (fourth-, fifth- or sixth-round draft candidates).

Gasseau (pictured), Hreschuk, a Boston College recruit, and Murchison are skating for the U.S. National Team Development Program’s Under-18 Team this season, while Buium, a University of Denver commit, is patrolling the blue line at Shattuck-St. Mary’s prep school.

Gasseau, Hreschuk and Murchison were members of the Jr. Kings’ 2017-18 Pacific District champion 14U AAA team that advanced to the USA Hockey National Championships.

The 2021 NHL Entry Draft was originally expected to be held in June 2021, though will likely be delayed because of the suspension of the 2019-20 NHL due to the COVID-19 pandemic and later-than-normal start of the 2020–21 NHL season.