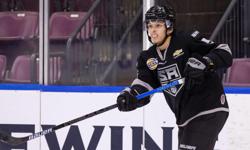 “Ever since I was 5 years old and started playing, my dream was to play Division I hockey, so this is truly surreal,” said Sansbury, the Silverbacks' captain. “I’ve been talking to Sacred Heart for a couple years now and I felt like it was somewhere I could call home for four years. The program has only been going up and I see them still building, so it was definitely something I wanted to be part of.

“I want to thank my mom and dad; they’ve been my rock and my heroes growing up and they’ve always been there for me and always believed in me. Also, all the coaches I’ve ever played for and my friends and family who've supported me along the way. I definitely want to thank the coaching staff here, too, because they truly believed in me and have really helped develop my game.”

“We're super proud and super happy for Hunter and his family,” Silverbacks head coach Tyler Shattock added. “His demeanor and overall character are outstanding. He’s a guy who always wants to be on the ice and wants to learn. He’s just a top-tier kid. I think Sacred Heart is getting a guy who’s going to make a real impact, on and off the ice.”