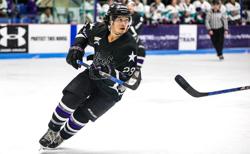 “I’m honored to have the opportunity to play NCAA Division I hockey at the Air Force Academy,” said DeCarlo. “I want to thank all of my coaches, teammates and billet families who’ve helped me get here, with a special thanks to my parents and sister for all of their support over the years.

“Who knew starting out as a roller-kid in Huntington Beach, California, would lead to playing for and serving the Air Force? I can’t wait to be a Falcon; the stoke is high.”

In the summer of 2019, DeCarlo was selected and represented the Brahmas on Team NAHL at the Sirius Ice Hockey World Cup in Sochi, Russia.