Former Los Angeles Jr. King Mattias Sholl was named the USHL Goaltender of the Week for the week ending Jan. 10 after picking up two wins in three appearances. 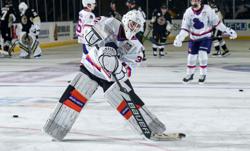 A member of the Youngstown Phantoms, Sholl picked up a pair of wins while turning aside 81 of the 87 shots he faced in three appearances.

Sholl, who yesterday announced his commitment to attend and play his NCAA Division I hockey at Bemidji State University, made 27 saves on Friday night in a 5-2 triumph over the Dubuque Fighting Saints before allowing just one goal on 31 shots in a 4-1 Phantoms victory over Dubuque the next night. On Sunday, Sholl steered aside 24 shots in a 4-2 loss to the Chicago Steel.

The 2000-born netminder finished the weekend with a 2.01 goals-against average to compliment a .931 save percentage.