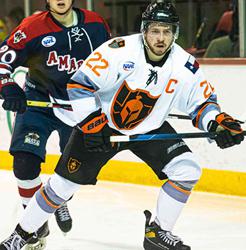 Currently an American Collegiate Hockey Association Division I club, Lindenwood, located in Missouri, will transition into an NCAA Division I program for the 2022-23 season.

A 2000-born forward, Wozniak has struck for four goals for 16 points through 32 games this season with the North American Hockey League’s Wichita Falls Warriors.

“I’m just beyond grateful for the opportunity,” said Wozniak, the Warriors’ captain.  “I’ve wanted to play college hockey my whole life and I’m excited to be a part of something very special at Lindenwood. Very similar to this year with the Warriors being their inaugural season, I’ll have the opportunity to be a part of Lindenwood’s inaugural season as the team transitions to (NCAA) Division I.”

Wichita Falls head coach Garrett Roth is nothing but high on Wozniak’s potential at the Division I level.

“As a coaching staff and organization, we’re so excited for Jackson and his family for earning this opportunity at Lindenwood,” said Roth. “Jackson had quite a few teams after him this offseason, but he chose to come here to Wichita Falls and help lead an expansion team in its inaugural season.

“His leadership from Day 1 led to him unanimously being voted as our captain and he’s continued throughout the season to be a difference-maker for us in every aspect of the game.”