Former Los Angeles Jr. King Dustin Wolf was named WHL Goaltender of the Month for February/March after opening the season with a 4-1-0-0 record, including three shutouts. 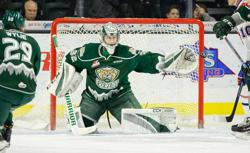 A member of the Everett Silvertips, Wolf recorded shutouts in three consecutive games to start the campaign, including a 22-save performance against the Spokane Chiefs on March 20, an 18-save effort versus the Tri-City Americans on March 21 and another 30-save outing against Tri-City on March 24.

Wolf has fashioned a record of 4-1-0-0, including three shutouts, to compliment a 0.59 goals-against average and a .979 save percentage to start the 2020-21 WHL regular season. He sits among the WHL leaders in all major goaltending categories, including goals-against average (third), save percentage (third), wins (tied for fifth) and shutouts (first).

Originally selected by the Silvertips in the fifth round (104th) of the 2016 WHL Draft, Wolf signed an entry-level contract with the Calgary Flames - the team that selected him in the seventh round of the 2019 NHL Entry Draft (214th overall) - last May.

In February, Wolf earned his first career professional victory as a member of the American Hockey League’s Stockton Heat in its 4-2 triumph over the Toronto Marlies. He turned aside 36 shots in the win on his way to being named the game's First Star.

A two-time member of the U.S. National Junior Team, Wolf and his teammates took home the gold medal at this year’s World Junior Championship, which was contested in Edmonton.

The 2001-born Wolf was also named the recipient of the USA Hockey Dave Peterson Goaltender of the Year award.