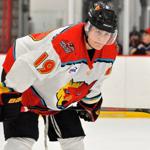 The 2002-born Rand (pictured) was selected in the fourth round by the Bismarck Bobcats, while Constantine, also a 2002 birth year, went in the sixth round to the Maine Nordiques. Price, a 2001-born, was picked in the seventh round by the Amarillo Wranglers.

The NAHL is considered one of North America’s premier junior leagues when it comes to developing players for NCAA hockey. It has also groomed countless players for the professional ranks, including the NHL.