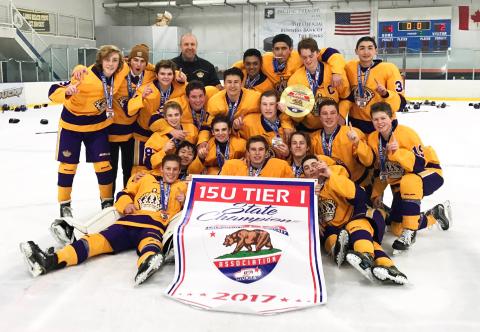 At this year’s California Amateur Hockey Association (CAHA) Tier I State Championships, which were contested last weekend (Feb. 3-5) at The Rinks-Lakewood Ice, the Los Angeles Jr. Kings’ 18U AAA, 15U AAA and Pee Wee AAA Minor teams celebrated titles in their respective divisions.

With its title, the 18U team will advance to the Pacific District Championships, which will be showcased from March 9-12 in Anchorage, Alaska.

The 15U AAA squad (pictured), led by head coach Jaro Modry, skated to a 4-1 in its division, downing the Jr. Ducks twice on Sunday (2-1 in overtime and 4-2) to stake claim to the title.

The 15s opened states on Friday with a 2-1 win over the Golden State Elite Eagles followed by a 2-0 loss to the Jr. Ducks, then bested the San Diego Jr. Gulls on Saturday, 4-2, before its Sunday rematches against Anaheim.

The title also moves the 15U AAA team on to its Pacific District Championships, which will be contested from March 9-12 in Las Vegas.

And while they both came up short of a state title, the Jr. Kings’ Bantam Minor 03 team, coached by Jeff Turcotte, and 16U AAA club, led by Jack Bowkus, still earned berths to their respective Pacific Districts (the Bantams will compete from March 9-12 in Anchorage; the 16s in Las Vegas).

The 16U AAA squad forged a 3-2 record at its state championships, falling to the Jr. Ducks, 2-1 in three overtimes, in the deciding match on Sunday, while the Bantam Minors finishing runner-up in its division at states, which were played from Jan. 27-29 in Lakewood, with a 2-2 mark.

In the Pee Wee AAA Major bracket, the Jr. Kings’ 04 club finished with a 2-2 record. The club’s Bantam Major 02 team finished states with a 0-2 mark.

The top three teams in the 18U, 15U and Bantam Major brackets advance districts; the top two in the 16U division advance.

In the 18U, 16U, 15U, Bantam Major and Pee Wee Major divisions, the top four teams in each division in CAHA regular-season play qualified for state playoffs, which for the fifth year in a row used a double-elimination format.

In the three-team Pee Wee Minor division, the top two seeds after round-robin play advanced to the championship game.

For more information on the Tier I state playoffs, including the complete schedule and results, visit CAHA.com.

The Pacific District is one of 12 districts established by USA Hockey and is composed of five affiliates that represent the states of Alaska, California, Nevada, Oregon and Washington, as well as one non-affiliated state (Hawaii).

For more information on the Pacific District Championships, visit PacificDistrictHockey.com.