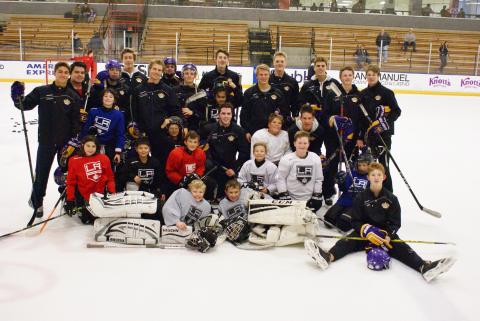 For a second straight season, the Los Angeles Jr. Kings’ 16U AAA team is engaging in a successful mentoring program with a couple of younger clubs within the organization.

And, by all accounts, both the Mike Macy-coached Squirt BB1 and Jeff Bain-led Squirt B2 teams - along with the Jack Bowkus-coached 16 squad - are benefiting from the experience.

“It’s an ideal way for our older players to give back to the up-and-coming future of youth hockey, and one they enjoy,” said 16U AAA team manager Helen Alex, who's quick to credit Michelle Wolf - the mother of 16U AAA goaltender Dustin Wolf - for helping organize the effort. “Our boys have a great time helping out; it gives them a chance to really appreciate where they came from as it relates to their development as hockey players.”

As part of the initiative, the 16s are on the ice eagerly assisting at the teams’ practices, working on puck-handling and shooting drills alongside the younger Jr. Kings.

The Squirt goalies are also afforded some quality one-on-one time with the 16 netminders, honing their skating skills and technique, as well as other positional and mental tactics.

Leading up to their contests, the Squirts are encouraged to up their dress attire to mirror that of the 16U Majors, who don suits at their various showcase events and games throughout the season, helping create a big-game atmosphere.

In turn, the 16U AAA club dresses in game-day suits and arrive early to set up the teams’ locker room complete with water and snacks, welcome them and help prepare them for the game.

After the practices and games, the Squirts are able to chat with the 16 players over a snack and soft drink.

“It’s a neat experience for our kids, and one that definitely builds a strong sense of camaraderie within our entire club,” said Macy. “All of our players and families value the time with the older kids.”

“It’s a lot of fun,” Bowkus added. “Our boys really get into it - which tells you a lot about them as responsible, community-minded young men - and the kids are able to have a good time and learn some valuable lessons along the way.”