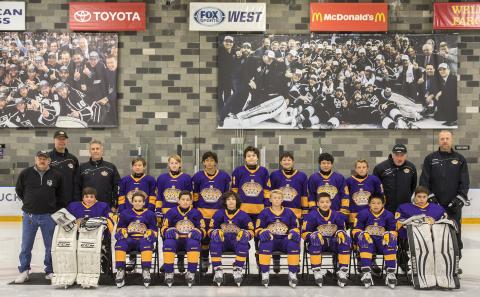 For a select few and fortunate Pee Wee teams from around the globe, February marks a signature event on the hockey calendar and, once again, the Los Angeles Jr. Kings will be well represented.

Now in its 58th year, the fabled Quebec International Pee Wee Tournament will welcome two Jr. Kings teams - the 2004 Major AAA and AA1 squads - for what expects to be a memorable 10 days-plus for the participating players and their families, both on and off the ice.

Sure, there’s the hockey, but what makes the worldwide tournament, which this year will run from Feb. 8-19, so unique is everything the teams experience away from the rink - from sightseeing to pin-trading to dogsledding to snow tubing to settling in with their French-Canadian billet families, with whom some of the players will reside during their stay.

Shawn Pitcher gets the hype. The Jr. Kings’ 04 Major AAA head coach has led two teams at the tournament during his decorated California coaching tenure, guiding a LA Selects squad to the Elite AAA division championship in 2012.

“It’s a special environment, no question,” said Pitcher. “It’s a great opportunity for the kids to play in front of big crowds, and you have the best teams in the world there - not just North America - so it definitely sets itself apart.”

The Jr. Kings’ Pee Wee AA1 coach, Robbert McDonald, has also done Quebec, leading the club’s Pee Wee AA1 squad at the showcase in 2014. He, like Pitcher, can’t wait to relive the experience.

“Seeing how that town gets behind the tournament - everywhere you go banners are up, people see your jackets and ask you about the tournament, share stories of their experiences, and just how many locals come and watch the kids play - is something else,” said McDonald. “It’s a long trip, but experiencing how the city gets behind a youth hockey tournament is amazing.”

In addition to the official tournament games - at least one of which will be played at the newly minted Centre Videotron, which opened in 2015 and seats over 18,000 for hockey - the teams will play a handful of exhibitions and surely fit in some pond hockey, too.

But with the eager anticipation leading up to the tournament comes plenty of planning and preparation. Just ask the teams’ managers - Wendy DiAntonio of the 04 Major AAA squad and Trevor Small of the AA1 club.

Both say that while they’re nothing but excited for their teams to take on Quebec, budgeting, organizing team activities and relentless fundraising efforts have been nonstop since last summer.

“I’ve needed a lot of hands on deck this season and my parents, along with (team general manager) Andrew Cohen, have been instrumental in helping get it all done,” said DiAntonio. “We have a great group of families and they all pitched in to help pull everything together.”

“Our families are perhaps the best possible group a manager could ask for when it comes to fundraising and always willing to go the extra mile,” Small said. “As a first-time manager, it’s been an exciting learning opportunity and shown me how incredibly supportive the hockey community can be.”

As for the players, they can’t wait to sink their teeth into what promises to be an experience of a lifetime.

“It's my first time traveling out of the U.S., and I'm glad my first place to visit will be Quebec City,” said Michael Schwartz, a defenseman on the 04 Major AAA team. “I’ve been waiting for this trip for a very long time.”

“Playing at the Videotron Center was great, and so was the pond hockey,” added AA1 forward Sebastien Brockman, who participated in the event last year also as a member of the Jr. Kings’ AA1 team. “It’s so cool, from the hockey to everything else we don’t get to do here in California.”