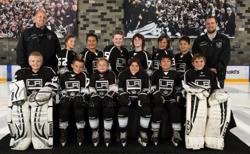 The Los Angeles Jr. Kings’ Squirt B2 team has advanced to the championship game in its division at this year’s Southern California Amateur Hockey Association (SCAHA) Playoffs.

The club will take on the California Wave in the winner-take-all finale this Saturday (March 25) at 1 p.m. at El Segundo’s Toyota Sports Center (NHL rink) for the right to be crowned champions.

“Our team is having so much fun, and that’s why we’re still alive and still riding this wave,” said Jr. Kings head coach Jeff Bain, who’s assisted behind the bench by Danny Patterson and Dan DeFranco. “The Squirt level is all about having fun and developing these boys and girls and, as far as I’m concerned, we’re AAA in that category.”

The Jr. Kings, who finished atop the SCAHA regular-season standings in their division with an impressive 14-0-1 record (29 points), opened playoffs the weekend of March 11-12 at Iceoplex-Escondido where they fashioned a 2-1 mark with triumphs over the California Heat (3-1) and Valencia Jr. Flyers (8-4) before falling to OC Hockey Club (2-4).

The strong showing earned L.A. a berth to the semifinals, which were contested the weekend of March 18-19 at The Rinks-Anaheim Ice, where it put forth a gutty effort to knock off the San Diego Saints, 2-1 in overtime, to advance to the title tilt.

Kara Camiolo is the team’s manager.

“We’re two teams left out of 24 (Squirt B squads in SCAHA), and we’re ready and honored for the opportunity on Saturday and proud to be representing the Jr. Kings,” Bain added.

Both the Jr. Kings and Wave will advance to the California Amateur Hockey Association A/B State Championships, which will be showcased from March 31-April 2 at Sharks Ice-San Jose. 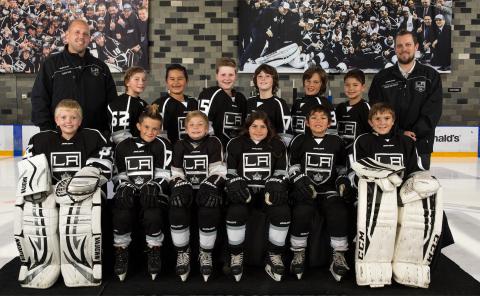