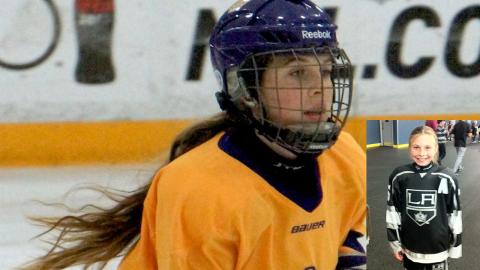 Yovetich, a defenseman, is currently in her second season patrolling the blue line for the Anaheim Lady Ducks’ 16U AAA team, which recently celebrated the Pacific District championship in its division while punching its ticket to next month’s USA Hockey National Championships.

“I’m very excited to play at Northeastern,” said Yovetich, who skated in the Jr. Kings program from Mites through her Bantam Minor AAA season in 2014-15. “It’s a tremendous hockey school with a great tradition, and it’s cool they play in one of the oldest rinks in North America (Matthews Arena)."

A sophomore in high school, Yovetich plans to graduate in 2019, then play a year of junior in Canada’s Provincial Women’s Hockey League before beginning her college career in Hockey East in the fall of 2020.

“I loved the (Northeastern) coaches (head coach Dave Flint and assistants Nick Carpenito and Jeff Pellegrini), too, and was blown away by the campus in downtown Boston,” she said. “It’s a great hockey city to say the least."

Recognized for her skills and smarts, Carpenito and Pellegrini first scouted Yovetich at a tournament in Toronto after her final Pee Wee season with the Jr. Kings where they were also impressed with her physical prowess.

Yovetich is quick to credit many of her Jr. Kings coaches for her development - both as a player and person - on her way to earning the opportunity to compete at the highest level of women’s college hockey.

Among them Robbert McDonald, who mentored Yovetich during her Pee Wee AA season in 2012-13 in preparation for her Pee Wee AAA and Bantam Minor AAA campaigns under the direction of coaches Shawn Pitcher, Rob Blake and Nelson Emerson (her team advanced to the quarterfinals in its division at the Quebec International Pee Wee Tournament in 2014).

“I’m so thankful for all my teammates and coaches with the Jr. Kings,” said Yovetich, who’s also excited to join the club’s ever-growing Alumni Wall of NCAA and professional players, which is located inside of El Segundo’s Toyota Sports Center - the Jr. Kings’ home facility. “I’m super fortunate to have been taught by such amazing coaches.”

“In many ways, I was raised at Toyota Sports Center and with the Jr. Kings,” she added. “Playing with such talented teammates inspired me to work hard and be my best, on and off the ice.”

At Northeastern, Yovetich will follow in the footsteps of Huskies recruit Eetu Selanne, a forward currently in his second year with the United States Hockey League’s Madison Capitols, and forward Nolan Stevens, a St. Louis Blues draft pick who recently completed his junior season at the school; both are graduates of the Jr. Kings organization.

“It’s awesome,” she said. “With the help of the Kings, along with such a dedicated group of coaches and support staff, it won’t be too long until one or more of those girls get the chance to play college hockey, too.”