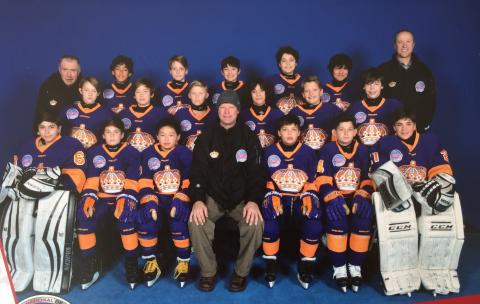 Ask anyone who’s embraced the experience and they’ll tell you advancing to the championship game in any division at the famed Quebec International Pee Wee Tournament is no easy task.

Members of the Los Angeles Jr. Kings’ 2004 Major team, though, can proudly and enthusiastically lay claim to that achievement.

The club persevered its way to the finale in the AAA bracket at this year’s showcase, which ran from Feb. 8-19, falling to the country’s No. 1-ranked team - Connecticut’s Mid Fairfield Jr. Rangers - 1-0 in the title game (the Jr. Rangers’ goal was scored shorthanded with 18 seconds remaining in regulation).

Sure, a championship celebration would have trumped all, but Jr. Kings head coach Shawn Pitcher says the top-to-bottom, all-hands-in-the-middle effort from the entire team from start to finish is what resonates loudest.

“You have to have a little luck (winning at Quebec) and everything pretty much has to go your way, but you know what? The kids showed up in the right frame of mind and their confidence started to grow every day we were there,” said Pitcher, who coached a LA Selects team to an Elite AAA division championship at Quebec in 2012. “They were having success and they did that by making a commitment to playing the game the right way.

“They competed hard and we had good goaltending (in the tandem of Nick Avakyan and Vincent Lamberti) - and of course that’s a big part of it. We were in some tight games that could have gone either way, but the boys worked hard and everything kind of snowballed in our favor.”

The Jr. Kings opened tournament play with an 0-2 loss at the hands of then-No. 2-ranked Detroit Honeybaked at the 18,000-seat Centre Videotron before rolling off two victories in their remaining pool games: 3-2 over the Philadelphia Jr. Flyers and 1-0 over the Whitby (Ontario, Canada) Wildcats.

The club continued to build some serious swagger as the tournament, which in this its 58th year of operation regularly attracts the best Pee Wee-aged teams from around the globe, unfolded into the quarterfinals, according to Pitcher.

“That was probably the best part of it,” said the coach. “You could see their confidence growing and them believing in one another, and that was great to see.”

In the quarters, L.A. doubled-up Pittsburgh Jr. Penguins Elite, 4-2, before taking down the Middlesex (Massachusetts) Islanders in the semis, 1-0, in overtime thanks to the game-winner off of the stick of forward Evan Konyen.

That staged the winner-take-all matchup against Mid Fairfield.

“The kids were really excited to get back to Centre Videotron to play in front of all those people, and they knew they were up against the No. 1 team in the country,” said Pitcher.

“We knew it was going to be tough, but our boys competed; they competed hard and gave everything they had and, as far as I’m concerned, you can’t ask for anything more.”

Cade Moxham, a forward on the club who notched the game-winning marker in the Jr. Kings’ 1-0 triumph over Whitby, was awed by the Videotron crowd entering the title game, but says he and his teammates were nothing but dialed-in on the task at hand.

“Once the game started, I played as hard as I could every shift and started to forgot about how many people were watching,” said Moxham. “It was hard to lose such a close game, but I know we tried our best.”

“That championship game was packed with fans and so exciting,” added forward Brando DiAntonio. “I had to forget about the crowd so I could focus on the game.”

And while the title-game defeat understandably stung, Pitcher is quick to point to the silver lining from what proved to be an exceptionally-played, hard-fought, emotional couple weeks of hockey from a gifted club based in Southern California on one of the world’s biggest stages.

“It was tough, and it was going to hurt for awhile,” said Pitcher. “But the kids gave everything we asked of them - that’s all you can do, and we can live with the outcome when they do that.

“At 12 years old, they’re going to play more hockey games throughout their lives and, hopefully, they enjoyed the experience of it all and will move forward and become better players because of it.”

“It was a bittersweet finish, but an extraordinary experience,” added team manager Wendy DiAntonio.

On top of all the extracurriculars that accompany the Quebec tourney, including sightseeing, pin-trading, snow tubing, playing pond hockey and settling in with their French-Canadian billet families, with whom the players resided during their stay, the 04s also played four “friendlies” against the Long Island Stars, Team Illinois, the Adirondack Jr. Wings and a team from the Czech Republic.

The spectacle also marked the 10th Quebec tournament coached by Igor Nikulin, who’s widely considered one of the most revered youth hockey teachers in all of California.

During his decorated coaching tenure, he’s guided two teams to Quebec championships in their respective divisions and assisted Pitcher behind the bench on the Selects’ 2012 title team.

Testing the players in an unfamiliar environment, Nikulin says, is what makes the tournament so unique.

“The fact that the kids are billeted by French-Canadian families - and for California kids, placed in a different cultural environment with a lot of snow and the chance to play pond hockey - is special,” said Nikulin. “To experience cold weather and have to deal with it and not have their parents around all the time I think is good for them.”

“He started out with this group back when they were Squirts, so he definitely has a great relationship with all these kids and their families,” said Pitcher. “He was really emotional (after the championship game), but I don’t know if there was anyone up there (in Quebec) that worked as hard as that man.

“He does a great job scouting other teams and doing all the things in the background that a lot of people don’t see and notice, and I know the kids have a lot of respect for him.”

Jaro Modry also assisted behind the bench, and Andrew Cohen is the team’s general manager.

“This team has good chemistry,” said Pitcher. “They get along well and they’re a good group of kids.”

“It’s a special group,” Nikulin added. “These kids play with a full commitment to the game and their team and pay a lot of attention to detail.”

And in the end, while the Jr. Kings’ spirited run didn’t end with a championship, the almost-two-week adventure, both on and off the ice, won’t soon be forgotten.

“It was the greatest hockey experience of my life,” Moxham said. “I had a lot of fun and met lots of new people, including my billet family. And there were a lot of locals supporting the Jr. Kings - wearing Kings jerseys and cheering for us - that helped a lot.”

“It was a blast,” Brando DiAntonio added. “My billet family was awesome and it’s a trip I’ll never forget.”