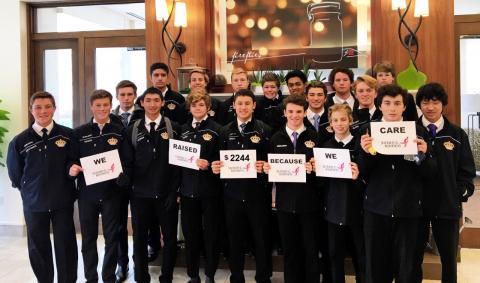 The Los Angeles Jr. Kings’ Midget 15U AAA team scored big in the fight against cancer recently, raising over $2,200 for the Susan G. Komen Breast Cancer Foundation of Los Angeles.

As part of a “Buck a Puck” fundraiser, each family on the club pledged a specific dollar amount per goal scored - ranging from $2 to $10 - for all games played in October, which is Breast Cancer Awareness Month.

The Jr. Kings lit the lamp an impressive 32 times during the month of October to help lift them to a $2,244 total.

“It was quite a month to say the least, and a perfect one to help push our support for Susan G. Komen to another level,” said Melonee Patterson, mother of Midget 15U AAA center Aidan Patterson (Aidan Patterson spearheaded the effort and visited L.A. County Susan G. Komen to deliver the check). “It’s great to rally around such a worthy cause, and the boys really embraced the opportunity."

15U AAA head coach Jaro Modry was fully supportive of his team’s efforts.

“What a selfless accomplishment by our entire team,” said Modry. “For our kids and their families to take this effort on says a lot about the character and quality of our entire group.”

Last season, a core of the 15U AAA group played for the Jr. Kings’ Bantam AA1 team and delivered a similar effort, raising over $1,500 for Susan G. Komen.

“This has basically become a tradition now for October and hopefully it motivates our team to score more goals, especially when we can help those in need,” Melonee Patterson added. “We have a great group of boys and families that support this worthy cause with enthusiasm, and we want nothing more than to build on it in the future.”