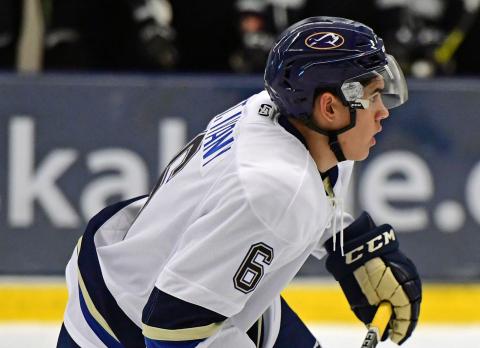 Jack St. Ivany, a graduate of the Los Angeles Jr. Kings program, has been selected to compete in the upcoming United States Hockey League (USHL)/NHL Top Prospects Game, which will be showcased on Jan. 10, 2017 in Sioux Falls, S.D.

A defenseman from Manhattan Beach, St. Ivany has totaled six assists through 18 games in this his first season with the USHL’s Sioux Falls Stampede.

St. Ivany, a member of the Jr. Kings’ 16U AAA Pacific District-championship team a season ago, has committed to attend and play his NCAA Division I hockey at Yale University following his junior career.

The selection process for players competing in the Top Prospects Game was completed in cooperation with NHL general managers and scouts, NHL Central Scouting and USHL general managers. All 40 players chosen are eligible for the 2017 NHL Entry Draft.

NHL Central Scouting recognized St. Ivany on its preliminary “Players to Watch” list of 2017 draft-eligibles, which was released in October.

In the four-year history of the USHL/NHL Top Prospects Game, 58 players named to the roster have gone on to be selected in the NHL Entry Draft, including three first-round selections.