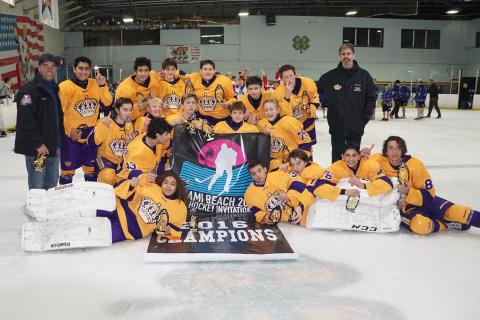 The Jr. Kings fashioned a 5-1 record at the prestigious event - it annually attracts a handful of the very best 2003 birth-year teams in the country - including a 5-0 victory over Philadelphia-based Team Virtua in the championship game.

“To come out on top against such a strong caliber of competition says a lot about both the character and work ethic of our entire group,” said Jr. Kings head coach Jeff Turcotte, who's assisted behind the bench by James Gasseau and Glen Murray. “From a developmental perspective, it’s always nice to be tested against the best, and our kids responded to the challenge.”

Ranked No. 3 in the nation entering the invitational, the Jr. Kings opened pool play on Thursday with an 8-2 triumph over No. 9-ranked Minnesota Gentry Galaxy before falling to No. 2-ranked Detroit Belle Tire, which hosted the event, 4-2.

The Jr. Kings rebounded the next day, however, finishing pool play with a 5-0 victory over Virtua (No. 7 in the nation).

In Friday’s quarterfinal, the Jr. Kings cruised past Florida Alliance (No. 25), 6-0, before exacting revenge over Belle Tire in the semis on Saturday with a 3-2 victory and then besting Team Virtua again on Sunday in the finale.

“From the players to the parents to our coaches and support staff, this is such a great group to coach,” Turcotte added. “Everyone is fully committed to the team’s success, which is so important especially when we matchup against these powerhouse programs, both in the U.S. and Canada.”