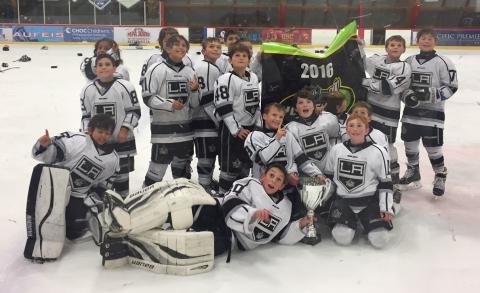 It might still be in its infancy, but the NHL Youth Cup tournament has wasted little time solidifying its footing on the national stage.

What started four years ago as an eight-organization, eastern-based event has since evolved into a nationwide festival with a number NHL-affiliated youth hockey programs competing against each other at the Squirt Minor through Bantam Major levels.

This year marked the NHL Youth Cup’s first-ever West Division event, which was held earlier this month in Dallas (2002, 04 and 06 birth years) and The Rinks-Anaheim Ice (03, 05 and 07 birth years); the New York Islanders and Philadelphia Flyers hosted the East Division showcase.

Pat Ferrill, the senior vice president of Flyers Skate Zone - the official training facility of the NHL club - who helped launch the Youth Cup with the support of the NHL, said incorporating the tournament’s presence out west was just a matter of time.

“It was a natural,” said Ferrill. “This event is a celebration of the sport and an opportunity to grow the game and the visibility of the game, so coming out to Dallas and Anaheim made perfect sense.”

The Los Angeles Jr. Kings made their presence felt at the Anaheim event, celebrating a pair of division championships while finishing runner-up in the other.

One of North America’s best in its age group, the Jr. Kings’ 2003 Bantam Minor AAA team ran the table with ease in its bracket, forging a perfect 5-0 record while outscoring its opponents 31-3 along the way.

Goaltenders Alex Bonrouhi (three wins) and Tyler Krivtsov (two) took care of the rest at the other end of the ice.

“It was a good weekend for the kids,” said Jeff Turcotte, head coach of the Jr. Kings’ 03 squad. “Any time the NHL gets behind an event you know it’s going to be a neat experience, and this was no exception.”

The Jr. Kings’ 2007 Squirt A team also proved flawless at the Youth Cup, fashioning a perfect 5-0 record, including two, one-goal victories, in its division and outscoring its foes by a 30-9 count.

Between the pipes, goaltenders James Keefer (four wins) and Ryan Denes (one) backstopped the 07s to the title.

“The kids played hard,” said Turcotte, who also leads the Jr. Kings’ 07 contingent. “We had to dig deep to pick up a couple of those wins, but everyone rallied together and we got the job done.”

And while it didn’t bring home a banner, the Jr. Kings’ 2005 Pee Wee Minor AAA team finished runner-up in its division after posting a formidable 4-0-1 record.

“It was a rewarding experience for sure,” said Jr. Kings 05 head coach Nick Vachon. “To see the NHL get behind the continued growth of youth hockey on a national level is always encouraging, and this event is a perfect example.”

And with 18 programs participating at this year’s Youth Cup, Ferrill wants nothing more than to see that number grow in the coming years.

“Our goal is to have every NHL-affiliated youth program participating at some point,” said Ferrill, who expects the West Division event to return to Anaheim and Dallas in 2017 (the even birth years in Anaheim; the odd in Dallas). “If we can get them all next year, that would be awesome.”