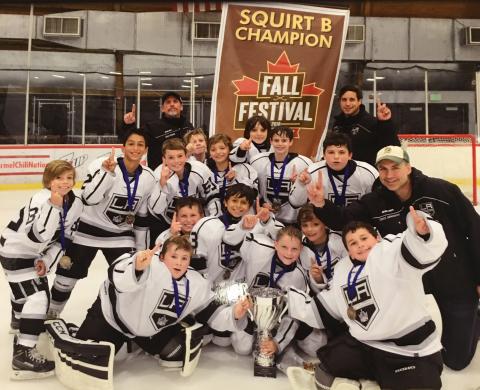 The Los Angles Jr. Kings’ Squirt B1 team took home the top prize in its division at this year’s Anaheim Jr. Ducks-hosted Fall Festival, which was showcased over Thanksgiving Weekend in Southern California.

The Jr. Kings forged a 5-1 record at the event, including a 5-4 shootout win over the Rebels in the championship game.

“I couldn’t be more pleased with our team’s performance last weekend,” said Jr. Kings head coach Chet Carlbom, who’s assisted behind the bench by Tommy Tartaglione and Andy Jurkowski. “We toughed-out several close games to come out on top; our level of effort was simply outstanding.”

The Squirts opened the tournament with a 3-2 victory over Jr. Ducks-Maxwell before falling to Jr. Ducks-Kurtz, 1-0. The Jr. Kings rebounded, though, rolling off wins against the Vacaville Jets (10-2), California Golden Bears (4-3) and Paramount (2-1).

“In a very short period of time, these kids have come together and embraced team objectives over individual play,” said Carlbom. "They shared the puck very well and it showed up on the scoreboard.”

Jr. Kings forward Matteo Alvarez copped the division’s Most Valuable Player honors after striking for five goals and three assists over the weekend. He also lit the lamp in the championship-game shootout.

Forward Hayden Walkinshaw and defenseman Jackson Jurkowski chipped in three goals and two assists apiece, with Jurkowski connecting for the winning goal in the shootout.

The goaltending tandem of Hudson Feller and Anderson Pietrzak was rock solid between the pipes with each player picking up multiple wins.

“This is an incredibly gritty and determined bunch,” Carlbom added. “Coming out on top after playing six games in three days, including a pressure-filled overtime and shootout in the championship game, is a real testament to this team’s character.

“We’re looking forward to building on the successes we achieved last weekend to achieve our goals for the rest of the season.”