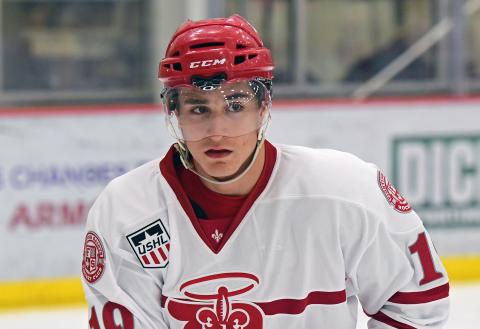 When it comes to advancing players to higher levels of the game, few do it better than the Los Angeles Jr. Kings organization.

Over the years, thanks in part to its experienced and well-connected coaching staff, the program has helped dozens of its players reach the professional, NCAA and elite-level junior ranks - and it’s showing no signs of slowing down.

“I don’t think there’s any question we have some of the best in the business when it comes to our coaching assets,” said Jr. Kings executive director Kelly Sorensen. “These guys have so much knowledge and, the way they teach the game and run their practices, it’s no wonder we have so many of our players moving on to bigger and better things, on and off the ice.”

Harper made his NHL debut on Oct. 13 against the New Jersey Devils.

Others toiling in the professional ranks this season include forward Mitch Callahan, who’s skating in the Detroit Red Wings organization; Chad Ruhwedel, a defenseman in the Pittsburgh Penguins organization; and Thatcher Demko, a goaltender in the Vancouver Canucks organization.

A handful of other Jr. Kings alums are also playing professionally in the ECHL, as well as overseas.

“Wherever you come from, reaching professional hockey is no easy task, so we’re proud to see a few of our own earn the right to compete at that level,” said Sorensen. “And I have a feeling we’ll see a few more find their way there in the not-too-distant future.”

“For these boys to be able to earn an education and, at the same time, play at the highest level of college hockey is an opportunity of a lifetime,” said Sorensen, who played his college hockey at Ferris State University. “The experience is second to none.”

And a number of former Jr. Kings are making their first foray into high-level junior hockey. Among them are forwards Cole Guttman (pictured), Jake McGrew and Murphy Stratton and defenseman Jack St. Ivany - all members of the Jr. Kings’ Pacific District-champion 16U AAA team last season.

Both Guttman, a St. Cloud State recruit, and St. Ivany, who will play his NCAA Division I hockey at Yale University following his junior career, are playing in the United States Hockey League (USHL) - Guttman with the Dubuque Fighting Saints; St. Ivany the Sioux Falls Stampede.

McGrew is with the Western Hockey League’s (WHL) Spokane Chiefs, and Stratton is skating for the WHL’s Calgary Hitmen.

New Jr. Kings general manager Nick Vachon is nothing but excited where the program is headed from a player development standpoint.

“I think we’re just scratching the surface,” said Vachon. “Between our coaching staff and all the other resources we have at our disposal, not to mention the added support of the Los Angeles Kings, I expect to see a lot more of our players recruited to the higher levels in the coming years.”