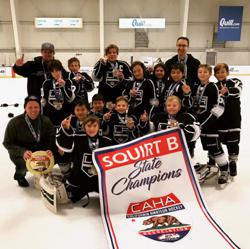 The Los Angeles Jr. Kings’ Squirt B2 team came out on top in its division at this year's California Amateur Hockey Association (CAHA) State Championships after its 4-3 overtime triumph over the California Wave in the title game, which was contested today (April 2) at Sharks Ice-San Jose.

Between the pipes, goaltender Jake Miller turned aside 18 shots.

“I’m so proud of this entire group of players and their families,” said Jr. Kings head coach Jeff Bain, who’s assisted behind the bench by Danny Patterson and Dan DeFranco. “This entire season was all about learning and having fun, and I can enthusiastically say we accomplished both of those goals on our way to a state title.”

The Jr. Kings opened states on Friday with an 8-1 victory over the Vacaville Jets before knocking off the San Francisco Sabercats, 5-1. L.A. fell to the Wave on Saturday, 4-3, before exacting revenge over the club in the title game.

Kara Camiolo is the team’s manager.

“I'm so impressed with how hard these kids worked the entire season, along with how well they bonded and grew together as a team,” Bain added. “They’re all great young men and women and deserve to be called state champions.”

The Jr. Kings also celebrated the championship in its division at this year's Southern California Amateur Hockey Association Playoffs after its 5-1 triumph over the Wave in the title game, which was contested on March 25 at El Segundo’s Toyota Sports Center.

For more information on the CAHA State Championships, visit CAHA.com.