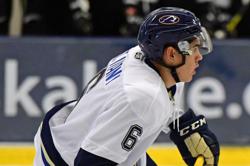 Yamamoto was tabbed No. 17 among North American skaters. Having recently completed his third season with the Western Hockey League’s Spokane Chiefs, the forward from Washington led the circuit’s Western Conference in scoring with 99 points, including 42 goals, in 65 regular-season games.

A defenseman from Manhattan Beach, St. Ivany (pictured) was listed No. 125. In this his first season with the United States Hockey League’s (USHL) Sioux Falls Stampede, St. Ivany collected a goal and nine assists in 52 regular-season games.

St. Ivany, a member of the Jr. Kings’ 16U AAA Pacific District-championship team in 2015-16, has committed to attend and play his NCAA Division I hockey at Yale University following his junior career.