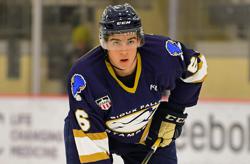 St. Ivany is listed No. 129 among North American skaters (a potential fifth-round selection).

A 1999-born defenseman, St. Ivany has totaled three goals and 17 assists through 28 games in this his second season with the United States Hockey League’s (USHL) Sioux Falls Stampede.

A Yale University recruit, St. Ivany was one of 40 players selected to compete in this year’s USHL/NHL Top Prospects Game, which was showcased on Jan. 9 in Kearney, Neb.

He was also a member of the U.S. Junior Select Team that competed in this year’s World Junior A Challenge, which was contested last month in Nova Scotia.

The 2018 NHL Entry Draft will be conducted on June 22-23 in Dallas at American Airlines Center, home of the Dallas Stars.