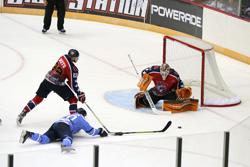 Sholl, 23, joins the Thunder for his first career ECHL stint after spending the first half of the 2017-18 season with the Southern Professional Hockey League’s (SPHL) Evansville Thunderbolts.

Sholl posted a 14-2-2 record with the Thunderbolts, leading the SPHL in victories in addition to a .924 save percentage and 2.31 goals-against average.

He began his pro career this season making two appearances with the SPHL's Macon Mayhem before joining Evansville.

Prior to beginning his professional career, Sholl spent four seasons at Bowling Green State University, where he appeared in 19 games during his collegiate career (2013-17).