The Los Angeles Jr. Kings’ 18U AAA, 16U AAA, 15U AAA and Bantam AAA Major teams celebrated titles in their respective divisions at this year’s California Amateur Hockey Association (CAHA) Tier I State Championships, which were contested last weekend at The Rinks-Lakewood Ice. 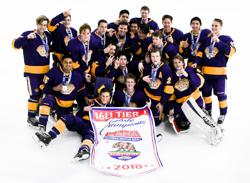 The Los Angeles Jr. Kings had high expectations heading into the first wave of this year’s California Amateur Hockey Association Tier I State Championships, and they didn’t disappoint.

In sweeping fashion, the organization’s 18U AAA, 16U AAA, 15U AAA and Bantam AAA Major teams all celebrated titles in their respective divisions at the event, which was contested the first weekend of February at The Rinks-Lakewood Ice.

With the victories, the four clubs punched their tickets to the Pacific District Championships, which will be showcased from March 8-11 at Solar4America Ice at San Jose, to play for the right to compete in April’s USA Hockey National Championships.

“Regardless the age group, winning a state championship at any level is no easy task, so to win four in one weekend certainly speaks volumes to the hard work and dedication each and every one of our players, coaches and families have put forth over the course of the season,” said Jr. Kings general manager of hockey operations Nick Vachon. “As an club, we couldn’t be more proud and can’t wait to see how these teams compete at districts and, hopefully, nationals.”

The Barry Dreger-coached 18U AAA team forged a 4-1 record at states, including a 3-1 triumph over the Anaheim Jr. Ducks in the championship game.

The 18s opened the weekend with a 1-0 loss to the Ontario Jr. Reign before rattling off wins over the California Titans (4-3 in overtime), Jr. Reign (2-0) and Jr. Ducks (6-4) before its rematch with Anaheim.

Forwards Malcolm Bohan and Vlad Fadeev led the Jr. Kings offensively at states, and goaltender Mattias Sholl backstopped the team to three of its victories, including the finale.

Led by Jack Bowkus, the 16U AAA club finished states with a 3-1 mark, culminating in a 2-0 triumph over the Jr. Ducks in the championship game.

The 16s blanked the San Diego Jr. Gulls, 7-0, to open the tournament before winning its first of three games played against Anaheim, 3-2 in a shootout. In Game 2 against the Jr. Ducks, Anaheim bested the Jr.  Kings, 3-0, before their winner-take-all rematch.

In the 15 bracket, the Jr. Kings, led by head coach Jaro Modry, swept their best-of-three series against the Jr. Ducks with back-to-back 4-1 victories.

Forward Thomas Stift led the Jr. Kings’ offensive charge with four goals (including a hat trick in Game 2) and two assists over the weekend, followed by defenseman Lucas Constantine (three assists). Between the pipes, goaltenders Kenna Berti and Michael Sochan each picked up a win.

The Bantam Major team finished with a perfect 5-0 record at states, including a 10-2 victory over the Jr. Ducks in the finale.

Forward Paul Minnehan struck for 18 points over the weekend (eight goals) to lead the Jr. Kings’ scoring attack, and goaltender Alex Bonrouhi backstopped the club to four of its five victories.

Luc Robitaille, the Los Angeles Kings’ president and a Jr. Kings board member, was quick to commend the program on its accomplishment.

“(These) achievements give us great pride, and congratulations are in order to each one of (our players) as well as to (our) coaches and parents,” said the Hall of Famer. “(Our players’) personal growth both (on the ice) and as young people is our goal each season, and (their) performance this year has made our entire organization proud.”

The Jr. Kings will shoot to run the table at Tier I states when their 13U, 12U and 11U teams tangle with the Jr. Ducks and Jr. Sharks from March 2-4 at The Rinks-Anaheim Ice and -Westminster Ice.