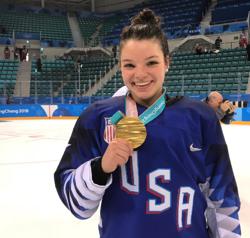 “For our players, I’m so happy they get to experience something different,” said Robb Stauber, head coach of the U.S. Olympic Women’s Ice Hockey Team. “We had some trying times this year. You learn how to transform yourself, how you think about and perform the game.

“This is probably a classic example of how hard it should be to win a gold medal.”

The U.S. team finished with a 4-1 record at the Winter Games, with its only defeat coming against Canada in the preliminary round (2-1).

Barnes is a three-time member of the U.S. Under-18 Women’s National Team and is the only player to have won three consecutive gold medals at the International Ice Hockey Federation Under-18 Women’s World Championship (2014, 2015 and 2016). She earned back-to-back Directorate Awards as the tournament’s best defenseman in 2016 and 2017.

Barnes, who joined the Women’s National Team in October, is taking time away from Boston College, where she played in five games as a freshman during the 2017-18 season.

The victory gives the United States its second gold medal in women’s ice hockey after Team USA claimed the inaugural gold medal in the event at the 1998 Olympic Winter Games in Nagano, Japan.