Former Los Angeles Jr. King Jake Rosenbaum, who played his 16U AAA and 18U AAA seasons with the program, has committed to attend and play his NCAA Division I hockey at the University of Minnesota Duluth beginning this fall. 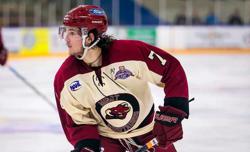 Former Los Angeles Jr. King Jake Rosenbaum has committed to attend and play his NCAA Division I hockey at the University of Minnesota Duluth beginning this fall.

A defenseman, Rosenbaum recently completed his third season of junior hockey in the North American Hockey League (NAHL) with the Minot Minotauros, who advanced to the league’s Robertson Cup championship game this past season.

Rosenbaum, a 1997-born from Trabuco Canyon who competed in February’s NAHL Top Prospects Tournament, totaled six goals for 12 points in 38 regular-season games for the Minotauros after being traded midseason by the NAHL’s Topeka Roadrunnners.

He split the 2015-16 campaign with the NAHL’s Wilkes-Barre/Scranton Knights and Amarillo Bulls.

“I liked UMD because of its outstanding hockey reputation, high-level coaching staff and the number of players the program moves onto professional hockey, which is my ultimate goal,” said Rosenbaum, who plans to study business media at Minnesota Duluth.

The Bulldogs celebrated the NCAA Division I national championship in April.

“Jake’s a great kid, a hard worker and will do anything that’s asked of him.”