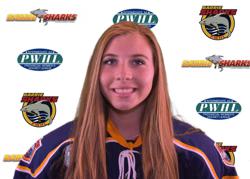 Gallagher, a 2002-born forward, recently completed her first season at the Vermont-based North American Hockey Academy playing in the Junior Women’s Hockey League at the 16U level, while Yovetich (pictured), a 2001-born defenseman, wrapped up her inaugural campaign with the Barrie Jr. Sharks (Ontario, Canada) of the Provincial Women’s Hockey League.

Nine boys players who skated with the Jr. Kings this past season, along with three alumni, were invited to participate in their respective birth years at this year’s USA Hockey National Select Camps, which will be held over the summer in Amherst, N.Y.