The Idaho Steelheads have agreed to terms with goaltender Tomas Sholl, a former Los Angeles Jr. King, on an ECHL contract for the 2018-19 season. The 23-year-old joined the Steelheads at the end of February to complete his first professional season. 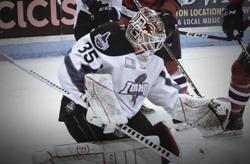 The Idaho Steelheads have agreed to terms with goaltender Tomas Sholl, a former Los Angeles Jr. King, on an ECHL contract for the 2018-19 season.

Sholl, 23, joined the Steelheads at the end of February to complete his first professional season; he was acquired from the Adirondack Thunder for cash considerations.

The Hermosa Beach native appeared in 11 regular-season games with Idaho, fashioning a 9-0-1 record in a Steelheads uniform to compliment a stingy 1.24 goals-against average and .953 save percentage. Sholl’s tenure with the Steelheads included a string of nine consecutive starts to help lead the team into the playoffs. His four shutouts were tied for second-most in the ECHL.

“We’re happy to announce Tomas’ signing,” said Steelheads head coach and director of hockey operations Neil Graham. “He had a very strong debut and was a big part of our success down the stretch. We expect him to continue to develop as a pro and we’re excited to work with him again.”

Sholl became the first Steelheads goaltender ever to win the Goaltender of the Week award in consecutive weeks, and just the third Steelhead to ever win twice in one season.

“I can’t wait to come back and help the Steelheads reach our goals of a successful season and, hopefully, a championship,” said Sholl. “It’s a real honor to return.”

The Steelheads were Sholl’s fourth team of 2017-18. He began the season in the Southern Professional Hockey League, appearing in 20 games for the Macon Mayhem and Evansville Thunderbolts while posting a record of 14-3-3 to earn a call-up to the ECHL with the Adirondack Thunder. With the Thunder, Sholl forged a 5-0-1 record to go along with a 2.05 goals-against average and .939 save percentage.

“I played in a lot of different organizations last year, and I can honestly say Idaho was the place I felt most comfortable,” said Sholl. “From the coaching staff to the players, I felt at home and part of the team from the moment I arrived.”

Through 19 regular-season ECHL appearances, Sholl has not suffered a regulation loss.

Sholl played three seasons of NCAA Division I hockey at Bowling Green State University, appearing in 19 games from 2013 to 2017 and posting a 7-10-0 record.