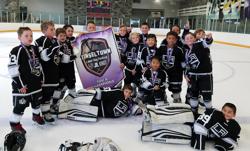 “We can’t thank all of the participating clubs enough for helping deliver what proved to be an exciting weekend of hockey to kick off the new season,” tournament director Brian McDonough said. “There was so much great competition in every division, and the camaraderie and sportsmanship displayed by all of the players, coaches, team managers and families was second to none.”

All 10U BB through High School games played at Toyota Sports Center were streamed live via the Internet through LiveBarn.com.

For more information and to pre-register for any or all four events, visit TinseltownHockeyTournaments.com.