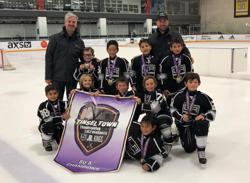 “We can’t thank all of the participating clubs enough for helping deliver what proved to be a great weekend of hockey to ring in the holiday season,” said tournament director Brian McDonough. “There was so much spirited  competition in every division, and the camaraderie and sportsmanship displayed amongst all of the players, coaches, team managers and families was second to none.

“We're also lucky enough to get such great support from both our terrific team of volunteers and the staffs at Toyota Sports Center, East West Ice Palace and LA Kings Valley Ice Center who help events like this hit on all cylinders.”

Tournament vendors included Northwest Designs of California, Origami Owl, Aufeis Hockey, Custom Sports Banner, Teammate Robotics and Quality One Engravers.
Kings Cove, Grimaldi’s Pizzeria, Mendocino Farms and Tin Roof Bistro served as restaurant partners for the event, and PSE Event Housing successfully coordinated all hotel accommodations for out-of-town teams visiting over the weekend.
All 14U and 12U games played at Toyota Sports Center were streamed live via the Internet through LiveBarn.com.
The Thanksgiving Weekend Extravaganza is part of the Jr. Kings’ Tinseltown Tournament Series. Pre-registration is now open for the Series’ remaining three events of the 2018-19 season: the Holiday Showdown (Dec. 27-30); Presidents’ Day Challenge (Feb. 15-18, 2019); and Carmen Starr Memorial Day Classic (May 24-27, 2019).
For more information and to pre-register for any or all of the events, visit TinseltownHockeyTournaments.com.