Former Los Angeles Jr. King and NHL draft prospect Dustin Wolf was named the Western Hockey League (WHL) Goaltender of the Month for December after posting a 6-0-0-1 record, including one shutout, to compliment a 1.27 goals-against average and .955 save percentage. 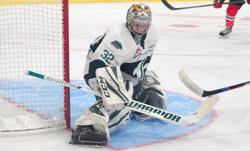 A member of the Everett Silvertips, Wolf posted a 6-0-0-1 record for the month, including one shutout, to compliment a 1.27 goals-against-average and .955 save percentage.

NHL Central Scouting recognized Wolf on its “Players to Watch” list for 2019 draft-eligibles, which was released in November. The 2001-born goaltender is listed as a C-rated prospect, indicating a fourth-, fifth- or sixth-round draft candidate.