A goaltender with the Fairbanks Ice Dogs, former Los Angeles Jr. King Mattias Sholl was named the NAHL's Midwest Division Star of the Week for the week ending Feb. 10 after backstopping his club to a pair of victories. 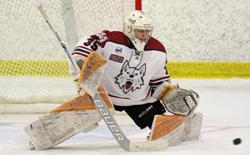 A goaltender with the Fairbanks Ice Dogs, Sholl backstopped his club to a pair of victories over the Topeka Pilots allowing just one goal in the process.

“Mattias was solid in both games,” said Ice Dogs head coach Trevor Stewart. “I think he really stood out on Saturday and he was there when the team needed him.

“He’s progressively gotten better as the season has gone along, so we’re confident his best hockey is ahead of him.”

With the victories, the Ice Dogs ran their winning streak to three straight games and moved just five points behind the Minnesota Magicians for first place in the Midwest Division.